A Book That Speaks to Our Moment

Rare is the book that speaks to the moment with intelligence, verve, and moral purpose while highlighting, and reinforcing, enduring insights that have been all but forgotten Tweet 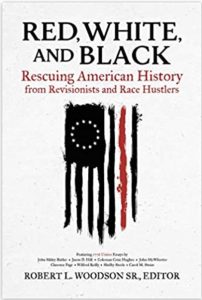 Red, White, and Black: Recovering the Grounds of Black Pride and Patriotism

Rare is the book that speaks to the moment with intelligence, verve, and moral purpose while highlighting, and reinforcing, enduring insights that have been all but forgotten. Such is Red, White, and Black (Emancipation Books, 2021), whose feisty subtitle, “Rescuing American History From Revisionists and Race Hustlers,” perhaps overstates the merely polemical character of the book. Red, White, and Black does indeed take aim, and very effective aim at that, at those who preach defeatism and despair when it comes to race and race relations in the United States of America. The varied contributors to this volume – some conservative, some liberal, some Christian, some not – are all participants in the 1776 Unites project initiated by the volume’s editor, Robert L. Woodson. They represent an impressive range of African-American and minority voices who, whatever their other differences, refuse the cult of victimization and the hate-filled politics that necessarily flows from it. The contributors are united in rejecting “contemporary groupthink about race, class, and American history that defames our national heritage, divides our people, and instills helplessness among those who already hold within themselves the grit and resilience to better their lot in life.”

The volume’s contributors celebrate black excellence in all its forms while rejecting the racialism, and “race pride” – white or black – that the great Frederick Douglass thought was so destructive of human dignity as well as of noble efforts by black Americans to lift themselves up toward lives of true self-help and self-respect. The contributors take pride in historic black achievements while affirming that the rights and duties of Americans citizens should know no color. In civic matters, colorblindness is the foundation of antiracism. As political scientist Lucas Morel points out in an inspired foreword to the volume, this is a book of essays that both Abraham Lincoln and Frederick Douglass “would smile upon.” With Douglass, it exhorts black Americans to “cultivate character above all else.” In the spirit of Lincoln (and of Martin Luther King, on occasion) the book’s contributors fully appreciate that the Declaration of independence (and the “spirit of ‘76” more broadly) speaks to all Americans, of whatever race and background, not just whites of English descent who happened to be alive at the time – as another Douglas (Stephen) falsely claimed in his famous debates with Lincoln in 1858.

With Frederick Douglass and Lincoln, the book’s essayists bring together pride in black achievement and moral, economic, and civic self-help with “Christian virtues like forgiveness, perseverance and most of all agape love,” as Morel puts it. As the noted political scientist Carol Swaim writes in her two contributions, she was thankfully never “taught to hate white people or to hate America.” She opted for New Testament principles over “hatred, bitterness, and distrust.” In addition, she “never fixated on the fact that {she} was black, poor, and female.” And she laconically adds that had she done so, “I doubt I would have achieved anything.” This humane and judicious mixture of legitimate pride (but not racial obsession and false claims of superiority) and humility within its proper sphere shows the path forward for individuals and communities. Here is a lesson for all Americans since the historic belief of so many black Americans in “revealed transcendent truths jibes well with the natural, transcendent principles that constitute the Spirit of ’76.” Black Lives Matter, with its indulgence of violence and its hatred of Judeo-Christian principles, is no heir to the wisdom of the black church, no matter what its shameless woke-capitalist sponsors claim.

Let me conclude by mentioning a few highlights of the book. Political scientist Wilfred Reilly lucidly establishes that one cannot reasonably claim that America today is a “structurally racist” country. And he courageously adds that the “primary social problems of today have nothing to do with historical racial conflict.” Black Americans have been the beneficiaries of massive affirmative action programs once criticized as “reverse discrimination.” A variety of nonwhite ethnic or racial groups surpass whites in the hierarchy of those with the highest incomes. These eighteen groups include Americans of Indian, Taiwanese, Lebanese, and Nigerian descent. In 1938, in the midst of a massive economic depression, only eleven percent of black Americans were born out of wedlock compared to seventy-two percent today. This drastic decline in the solidity of the black family owes little or nothing to racism. Reilly, like many other contributors, emphasizes the importance of education and the adoption of now much-derided “bourgeois norms” for black self-improvement. On both empirical and moral grounds, Reilly does not hesitate to call the U.S. a “good society.”

Likewise, the black journalist Clarence Page, an old liberal warhorse, proudly declares that “black patriotism is more important than victimization.” Does this knowledgeable and experienced student of American politics know something that a racial demagogue like Ibram X. Kendi doesn’t? It is Kendi who ignorantly attacks the wisdom of Lincoln and Frederick Douglass as “racist,” though both loathed racial servitude and defended the human dignity of each and every human soul. Both were committed to a “new birth of freedom” for blacks and whites alike. Why should Kendi’s vulgarized Marxism and his “antiracist” ideological clichés take precedence over the living wisdom of Lincoln and Douglass? True pride and true humility elevate the soul and bring people together in a community marked by freedom, responsibility, and mutual accountability. Is this not superior in every respect to a cruel and hate-filled ideology that reduces people of color to permanent victimization bereft of moral and civic agency, leading to inevitable resentment and despair?  The accompanying charge that whites are guilty – ontologically guilty – or who they are and not what they have done perfectly mirrors the totalitarian logic of twentieth-century ideologies such as Communism and Nazism. It entails the victory of hate over love, civic responsibility, and self-respect.

I will let the Georgetown political scientist Joshua Mitchell, the author of the most discerning book on identity politics, American Awakening, have the final word. Mitchell, the book’s only non-person-of-color contributor, argues persuasively that the claim that America is an oppressive, unjust, and “structurally racist” country is an invitation for an omnipotent government to rescue “innocent victims from a world that is irredeemably impure and which corrupts them.” He asks: “Is this the world in which we really want to live? An infantilized world, without adult perseverance and responsibility? A world without hope, a world without reverence for those whose achievements belie the suffering they have endured and overcome?

The choice is ours: are we to remain free men and women, or succumb to self-loathing and a new form of racialized despotism?

A+
a-
book
Red, White, and Black: Rescuing American History from Revisionists and Race Hustlers

Buy it
book
The Content of Our Character: A New Vision of Race In America

Buy it
book
The Triumphs of Joseph: How Todays Community Healers Are Reviving Our Streets and Neighborhoods