Part Two: Feynman, Strip Clubs and the Nobel Prize as a Performance-Enhancing Drug?

“Sometimes Richard would suddenly say, ‘Let’s knock off and go somewhere and fool around!’ The usual place we went was a topless bar in Pasadena, called Gianone’s.” Tweet

Feynman: “There was a period when there were topless restaurants in town: you could go there for lunch or dinner, and the girls would dance...”

A lot of his other papers and artifacts were auctioned off for almost $5 million dollars!

A lot of physicists would rank Feynman at #1 for his work in physics of the 20th century—Albert Einstein at #2.

Feynman: “I’d draw one of the dancing girls or one of the customers, just to practice.”

Do you recognize the guy on the right? 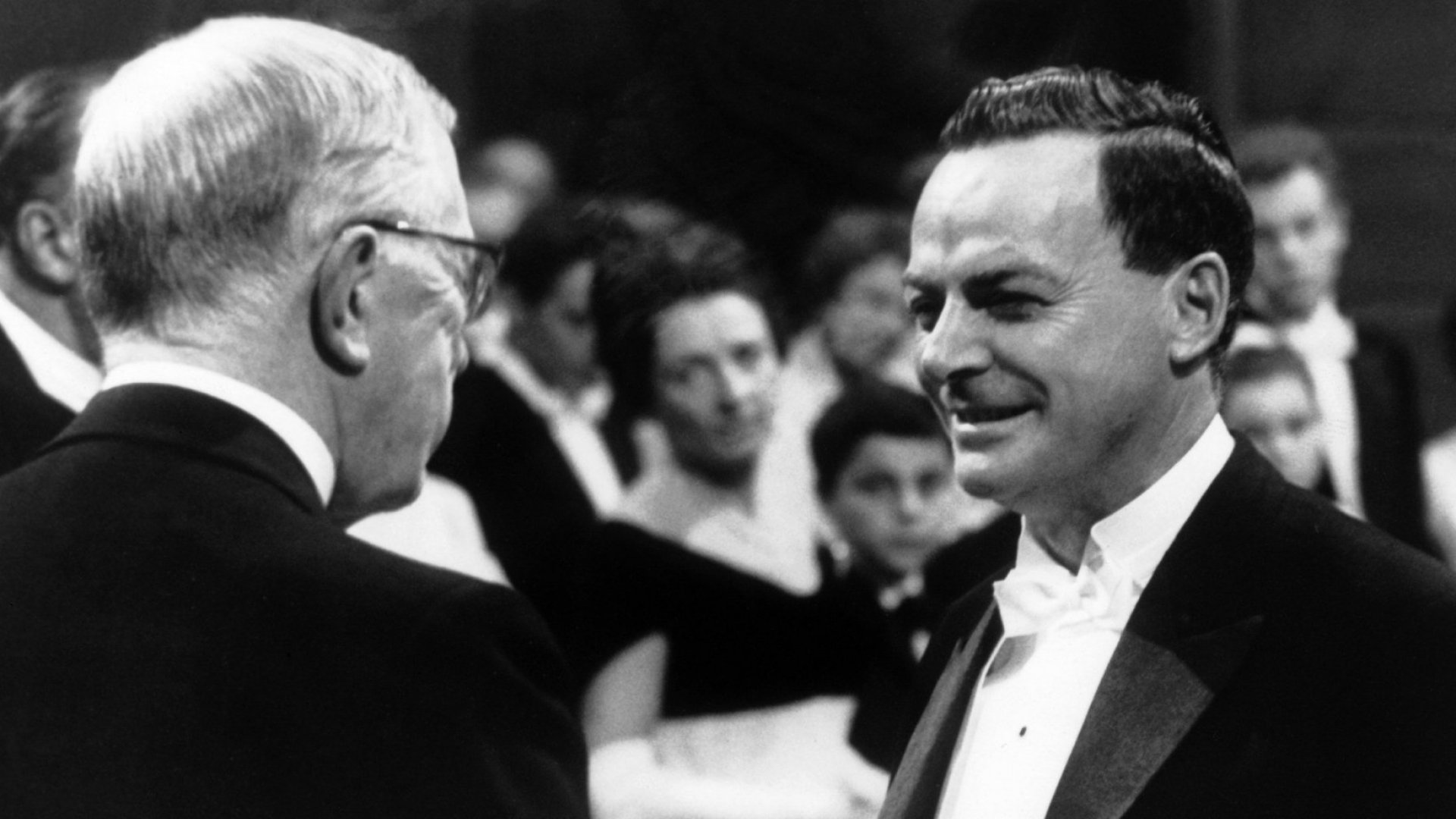 His name is Richard Feynman. In this photo, he’s in Norway, accepting the Nobel Prize in Physics in 1965. Physics is hard. So he’s smart.

How smart was Feynman? Many physicists would rank Feynman number one for his work in the physics of the 20th century—and Albert Einstein at number two. In other words, Feynman was smarter than the smartest person you can name.

“Feynman actually did an enormous number of calculations in that [strip club].”

So what’s that got to do with the concept of strip clubs as a possible performance-enhancing drug? As it happens, there was a strip club near Feynman’s house in Pasadena, California and it’s where he often went to draw, think, stare at unharnessed breasts and contemplate the tragedy of gravity, among other physics problems, according to Richard Sherman, one of Feynman’s doctoral students and the author of No Ordinary Genius: The Illustrated Richard Feynman:

“Sometimes Richard would suddenly say, ‘Let’s knock off and go somewhere and fool around!’ The usual place we went was a topless bar in Pasadena, called Gianone’s. There was always something happening at Gianone’s in the afternoon, every day of the week. We’d walk in, grab a table. Feynman knew everybody there—all the ladies; Gianone, the owner; and anybody who was a regular. He would go behind the bar and pick up an orange juice, because he never drank anything alcoholic. He would also grab a half-inch stack of those paper doilies, or place mats that they put down on tables in restaurants, and come back to the table. We might continue doing physics, or we might watch the ladies dancing on the stage. Frequently people would come by and chat, and this was the sort of entertainment that he liked. But it was kind of deceptive because, believe it or not, although this particular environment might not seem conducive to doing something like theoretical physics, over the years, Feynman actually did an enormous number of calculations in that place.”

Of course, anyything’s theoretical in a strip club, as Feynman himself must have agreed. As he wrote in his book, Surely You’re Joking, Mr. Feynman!:

“There was a period when there were topless restaurants in town: You could go there for lunch or dinner, and the girls would dance without a top, and after a while without anything. One of these places, it turned out, was only a mile and a half away from my house, so I went there very often. I’d sit in one of the booths and work a little physics on the paper placemats with the scalloped edges, and sometimes I’d draw one of the dancing girls or one of the customers, just to practice.”

Feynman was such a fan of his local strip club that when the county tried to close the place down on account of uncovered breasts, he was the bar’s only regular customer willing to come forward and testify publicly in court in defense of the bar and how it provided “a public need.” Of course, because he was a Nobelist, his testimony on behalf of the topless bar became news worldwide.

You can see one of Feynman’s paper placemats with scalloped edges and his physics calculations and one of his nudes from the strip club on Sotheby’s website, along with a lot of his other papers and artifacts that were auctioned off for almost $5 million dollars.

We know you’re a pretty smart guy too, of course. So when you get to your local topless joint, keep your eye on the paper placemats.

Buy it
book
“The Pleasure of Finding Things Out” By Richard P. Feynman

Buy it
book
“What Do You Care What Other People Think?” By Richard P. Feynman

Diversity and Tolerance Properly Understood and Pursued
Midlife Wanderlust
Pop Quiz: What Are the Five Most Mentally Challenging Sports?
Types of Spirits