For fathers with daughters: Happy Father’s Day! Now don’t screw it up.

At the risk of sounding a little syrupy, I have to say one of the great rewards of being the father of daughters is hearing them giggle together late into the night.  Tweet

Of all the examples we set for our kids, one of the most important is how we interact with women.

Your boys will grow up conducting themselves around the girls and women in their lives based on your lead.

Even more important, your girls will likely choose a man, if they are so inclined, who treats them and other women the way you do. It’s a big responsibility, this function of fatherhood.

Like you (I hope), I’m trying hard not to screw it up.

At the risk of sounding a little syrupy, I have to say one of the great rewards of being the father of daughters is hearing them giggle together late into the night.

My daughters are older now, and I find any late-night giggling a bit alarming, but you can read about my adventures as the father of three young daughters here, when I wrote about it for Women’s Health magazine many years ago: 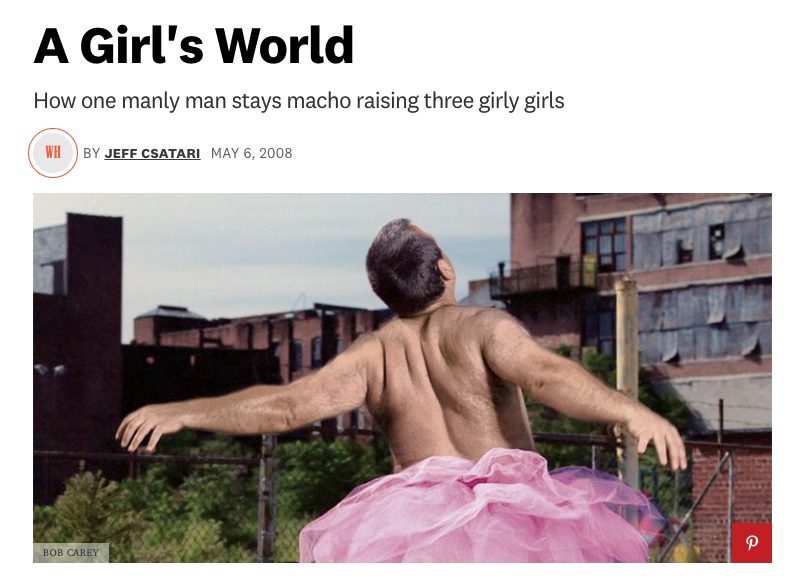 Our middle daughter, Lydia, has just moved home after graduating college, and the other night she was catching up with her 15-year-old sister Sophia. Listening to them talk and laugh, I felt a wave of oxytocin in my breast and I drifted off to sleep. I am blessed. We have a third daughter, Katelyn, who’s a water engineer in Philly, ensuring, I suppose, that the city doesn’t flood.

“You were planned out way better than our retirement investments.”

I could have used Katelyn a few days earlier. I heard Sophia sobbing in her room, the waterworks wide open. A friend had told her that she must have been born “a mistake” on account of the fact that my wife and I are so much older than all of her friends’ parents.

“Ha!” I said to Sophia. “You were planned out way better than our retirement investments.”

Sophia was so well-planned out, in fact, she was only made possible by me undergoing a vasectomy reversal, which you will be able to read about right here at PM soon.

Kids are funny. And sensitive. And very aware. Especially girls.

On the other hand, as I’ve been writing this, I realize that they’ve taught me far more than I ever taught them.

A+
a-
book
Men’s Health: The Big Book of Uncommon Knowledge: Clever Hacks for Navigating Life with Skill and Swagger!

Buy it
book
Your Best Body at 40+: The 4-Week Plan to Get Back in Shape–and Stay Fit Forever!

Pop Quiz: What Are the Five Most Mentally Challenging Sports?
SnipFlix Documentary: “The Vasectomist”
One Man’s Story: ‘I took a mulligan on my vasectomy and got my third child.’
A Feminist who Likes Guys