On the list of treasures under siege by today’s Woke hoards is Mel Brooks’ 1974 classic, “Blazing Saddles”—right up there with Dr. Seuss and “Little House on the Prairie.” Tweet 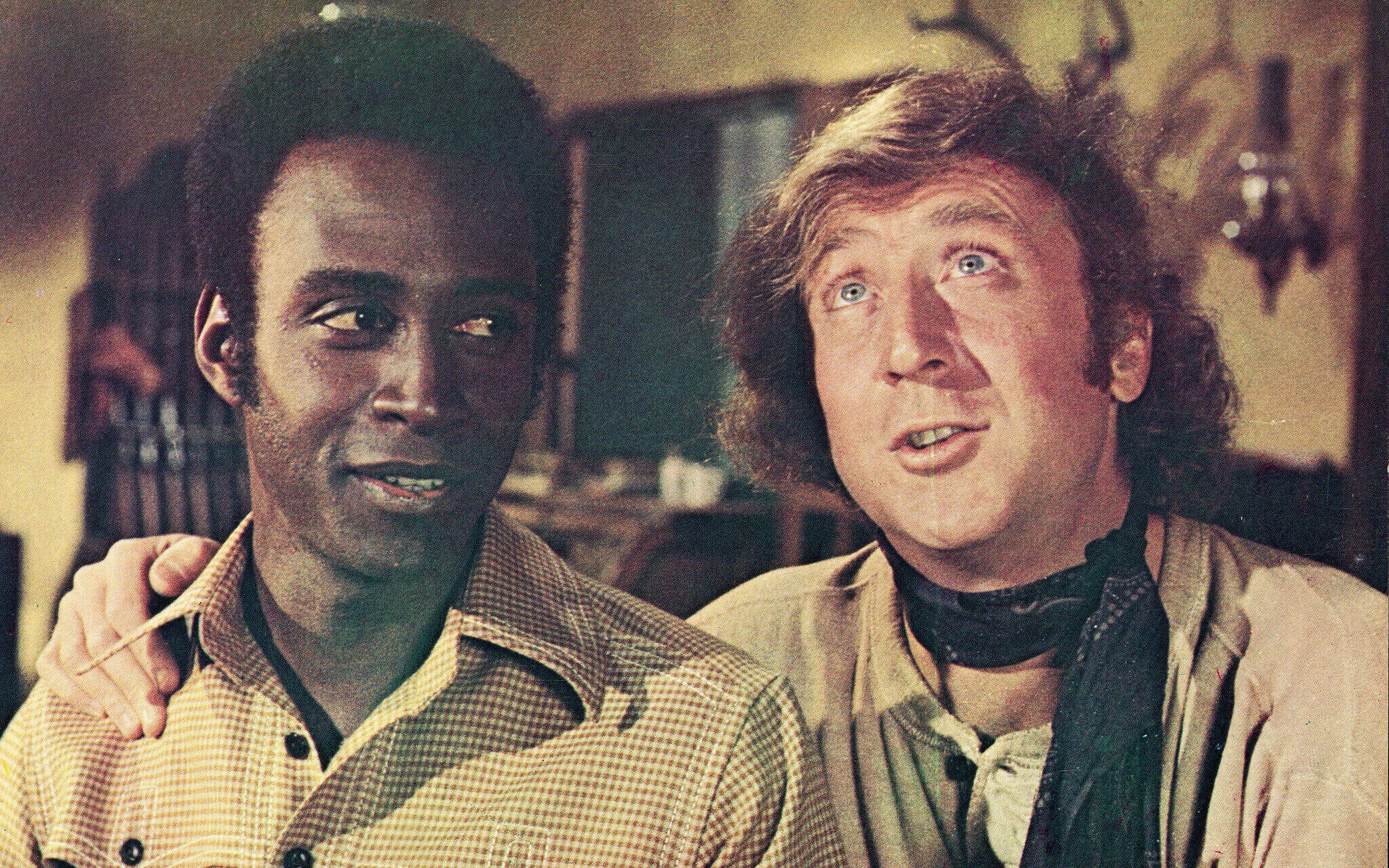 Though one of the all-time classic comedies, “Blazing Saddles” could never be made today.

“We thought we’d be making a little, low-budget picture, so we felt free to say disastrous things...”

“I probably wouldn’t have been quite so bold if Richie Pryor hadn’t been in the room. Brave as you are, he’ll always make you be braver.”

“Listen, I’ve watched cowboys eating beans all my life, and they should be farting by now.”

Editor’s Note: on the list of treasures under siege by today’s Woke hoards is Mel Brooks’ 1974 classic, “Blazing Saddles”—right up there with Dr. Seuss and “Little House on the Prairie.” Among other indignities to which this fiercely anti-racist satire has been subjected, HBO has added “an explanatory, introductory video,” wherein a self-serious, media-studies professor intones that the “racist language and attitudes” in the film “are espoused by characters who are explicitly portrayed here as narrow-minded, ignorant bigots.”

Brooks, who at 94 is happily still very much with us, offered the obvious rejoinder that such stuff will inevitably spell the end of comedy. “Comedy is the lecherous, little elf whispering in the king’s ear,” as he put it to a British reporter, “always telling the truth about human behavior.”

The following interview, which has never before appeared, took place in July, 1973, when Mel Brooks was completing shooting on the film—then still entitled “Black Bart.”

Q: How did Black Bart come about?

Brooks: Well, when David Brown was working here at Warner Brothers, he kept sending me scripts, and I kept saying no. In fact, more than just no—absolutely not. Because I really feel you should develop your own ideas, and it’s kind’ve hack work to take someone else’s book or screenplay. But then I got one about a black sheriff called Tex-X by a guy named Andrew Bergman, and I loved the concept. It was 1870 in the Old West, and everyone else was rolling Bull Durham, and this guy was rolling joints. At first I thought, well, maybe it’s just a sketch, but the idea haunted me.

Q: What were you working on at the time?

Brooks: I’d just finished a script I couldn’t sell to anybody—it was based on She Stoops to Conquer by Oliver Goldsmith.

Brooks: It was hysterically funny. These people are so British—in some scenes, I have subtitles to explain what they’re saying. And the stuff about class—I have beggars so downtrodden the rich walk on their faces.
Anyway, I talked to Brown about Black Bart, and he agreed to let me hire a couple of other writers to help me further develop the material—a team, like we had on The Show of Shows, then okay. So I got several other guys I really like, including Richie Pryor, because it was vital to have a black writer. And we kept the original writer, Andrew Bergman, which was unusual, since the company usually says ‘We already got everything we can out’ve him’—but I thought that would be unseemly. And we all got in a room and let the craziness flow. Because at the beginning, it’s important to be flat-out meshugah.

Nothing is too crazy—no idea is too far afield. The thing about great comedy is not to be too logical at the beginning; you’ve gotta throw every, single, vagrant insanity into it. Later, you can look at it more objectively and see what’s too silly and what works—because the script is the raft. A great idea, even if it’s filmed badly, will work. You can have the greatest cameraman and editor in the world—and the greatest director—but if it’s a lousy script, it’s gonna sink.

Q: So even then you thought you were doing something special?

Brooks: Well, originally we thought we’d be making a little, low-budget picture, so we felt free to say disastrous things and not risk Warner Brothers’ money. But as we worked on the script, it got bigger and bigger—because instead of just telling the story, we kept finding new ways to satirize The West and the whole western genre. We made up our minds to go after every cliché.

Q: How do you mean? Which clichés?

Brooks: Instead of cowboys just sitting around the campfire, eating beans, we’ll have them eating beans and farting.

Brooks: Listen, I’ve watched cowboys eating beans all my life, and they should be farting by now. Instead of cattle just moving around in the background and doing whatever cattle do—mooing, or mowing, or lowing—that’s what they do, isn’t it (low a lot)? Instead of lowing on the plains, we’d have them walk through some guy’s office. There’s the church scene from High Noon, with all the lily livered townspeople who want someone else to do the dirty work, and they’re all named Johnson—Gabby Johnson, Howard Johnson, Van Johnson… (Beat.) You know Alex Karras?

Brooks: I got him playing a heavy. When he parks his steer in the red zone and some officious do-gooder tells him it’s illegal, he slugs the guy’s horse and knocks him out.

Brooks: Trained horse. (Beat.) The magic of the movies. Anyway, the more the lunacy ran rampant, the more excited I got. And I decided to cap it off with an ending that’s either spectacularly bold or spectacularly foolish—they suddenly break out of 1874, into 1974.

Q: How has the studio reacted to all this?

Brooks: I think the word you’re looking for is “interference”—or maybe “alarm.” But no, because thank God we got John Calley—the head of production at Warner Brothers running interference—and his attitude is the bolder, the better. If it was anyone else, I’d get: “You can’t really have fifteen cowboys sitting around the campfire, farting—it’s funny in the room, but it’s too vulgar. Even though I didn’t get final cut, I trust them not to fool around with it too much. There are some studios that shall be nameless—MGM for one—that have a reputation for tampering with films. But Calley is straight and good.

Q: So usually executives don’t get you.

Brooks: In every part of my life, in every phase of activity, the powers that were—and they always were—were very comfortable with the status quo, and trying new things was very dangerous.

I truly assume that everyone in the audience is as bright as I am. In Black Bart, maybe I’m taking a risk when I appear for a minute as an Indian chief. We’ve just massacred everyone, and I come over and see the black family in the wagon; and I turn to my braves and say, “Schvartzes!” Then I go on and continue in Yiddish—but what the hell; if he was talking Cheyenne or Sioux, you wouldn’t understand him anyway.

Q: Are you worried there might be some problems with some of the racial stuff in the picture? I gather you’re not pulling any punches.

Brooks: Well, I probably wouldn’t have been quite so bold if Richie Pryor hadn’t been in the room. Brave as you are, he’ll always make you be braver.

Q: Presumably the budget kept growing along with the picture…

Brooks: Warner Brothers is—are? (Are Warner Brothers singular or plural?) Even though the company is, they still are. Anyway, they went along with it. It’ll end up at around two million—and we might even be under, due to my incredible cinematic dexterity. Because I know to say, “Action” first instead of “Cut,” which right there, saves a lot of money.

Brooks: I knew I had to be especially careful. Because with this kind of comedy—the most minor misreading, a wrong emphasis or nuance here or there—and your dream can fly out the window.

Q: So do you know what you’re doing next?

Brooks: Yes, my next project’s with Gene Wilder… It’s another spoof, set in the ’30s, based on an idea he had. We’re calling it Young Frankenstein, at least for now.

In Hollywood, White is the New Black
The Book of Guy: Work
SnipFlix Documentary: “The Vasectomist”
Woke Advertising