Where women are concerned, we are almost all given to self-delusion and outright idiocy.

If a woman’s good looking enough, lots of us will fail to notice the absence of such, other qualities as curiosity or wit.

At its heart, “High Fidelity” is about human connection and what really matters in relationships—short and especially long term.

The TV-series version—with the protagonist a woman—totally missed the point.

There is a moment in High Fidelity—the funny, whip-smart, remarkably honest movie about a man belatedly coming to maturity—where the protagonist, John Cusack’s “Rob Gordon,” has a sudden realization about the woman he’s long adored to the point of worship.

Since the love object, “Charlie,” is played by Catherine Zeta-Jones, no straight male with a pulse will have trouble understanding Rob’s infatuation. But he hasn’t seen her in a while; but watching her interact in the present with her hip, successful friends, it suddenly hits him: “Charlie’s awful! She doesn’t listen to anyone. She says terrible, stupid things; and she apparently has no sense of humor at all and talks shit all night long. Maybe she’s been like this all along.”

This lightning bolt of clarity is so of out of the blue that even on the third, fourth or fifth viewing, it half-catches you by surprise, cracking you up anew. For we know it speaks to a universal truth, which when learned at all, often comes at great cost—that, where women are concerned, we are almost all given to self-delusion and outright idiocy. The corollary: self-delusion and idiocy expand in direct proportion to the woman’s physical appeal.

At its heart, High Fidelity is about what really matters in relationships—short and especially long-term.

Let’s face it; if a woman’s good looking enough—and yes, elicits a sufficient degree of envy from other men!—lots of us will entirely fail to notice the absence of such, other qualities as curiosity or wit (or will just as likely find those qualities in her, even when they’re invisible to everyone else).

Hey, Hugh Hefner built an empire on dream girls whose greatest interests month after month included walking hand in hand on the beach.

While some of us never get past this stage—see Hollywood/trophy wife, or Hugh Hefner—to a greater extent, growing up is a matter of moving past it.

High Fidelity is full of sneaky insights about a number of important things—including ambition and career—and its portrayal of nerd culture is priceless. But at its heart, it is about human connection and what really matters in relationships—short and especially long term.

A particularly brilliant bit of casting is Danish actress Iben Hjejle as the slowly maturing “Laura,” Rob’s girlfriend—not only because she gives the character genuine substance but because she’s not Charlie/Z-J in the looks department.

The geniuses in Hollywood in 2020 came out with a TV-series version of High Fidelity but with one key difference—its lead was renamed “Robyn” and played by Zoë Kravitz. I watched maybe 20 minutes and gave up. It was all wrong, missed the whole point.

Do they really think men and women are interchangeable? Haven’t they experienced real life? Jeez, what’s next—a female version of The Searchers or Lawrence of Arabia?

Buy it
book
I Hope They Serve Beer In Hell 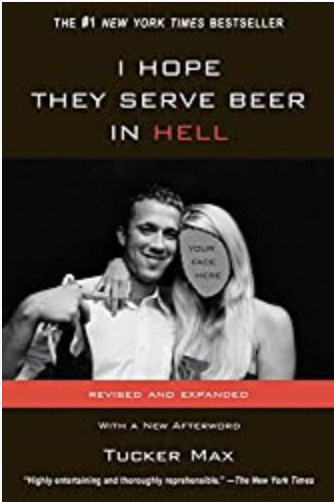 Buy it
streaming
“The Searchers”

In Hollywood, White is the New Black
Midlife Wanderlust
The Book of Guy: Work
Part Two: Feynman, Strip Clubs and the Nobel Prize as a Performance-Enhancing Drug?