Bernie Goldberg talks with conservative black sportswriter Jason Whitlock about the piece they wouldn’t let him do on HBO’s “Real Sports.” Tweet

I thought Whitlock was a natural for “Real Sports,” but my idea was shot down. Why? His worldview didn’t mesh with Bryant Gumbel’s.

“If you don’t think George Floyd is akin to Martin Luther King, you could be branded as racist. And people are in fear of that.”

“I’ve been called everything under the sun over social media......I just don’t take it very seriously because I know who I am.”

“[LeBron] is an athletic prodigy...[but] I don’t think he’s developed his understanding of the world to a very high level.”

Jason Whitlock is a sports journalist whose work goes way beyond what used to pass as traditional sports reporting. He’s 54 and calls himself “a fat, black man”—he stands just over six feet tall and weighs in at a hefty 318 pounds. But it’s not so much his physical size that makes him stand out. It’s his outsized opinions on all sorts of cultural and political issues, including the hottest one of all—race in America. A New York Times story about him ran under the headline, “A Journalist Whose Sport Is Controversy.”

What makes Whitlock so despised (by elites both in and out of journalism) is he’s guilty of an unpardonable offense: Whitlock is a black conservative—a sin that, as far as liberal elites are concerned, ranks right up there with crimes against humanity.

Which brings us to my history (of sorts) with Whitlock. When I was a correspondent on HBO’s “Real Sports,” I pitched a story about him—a profile of a black, conservative journalist who went to college (Ball State University in Muncie, Indiana) on a football scholarship and was (and still is) making waves in the world of sports. I thought it was natural for a show that often featured smart people with strong opinions. But my idea was shot down. Why? Because Whitlock’s worldview didn’t mesh, I was led to believe, with the left-of-center sensibilities of the show’s host, Bryant Gumbel.

I left “Real Sports” in 2021. So when I was asked to interview Whitlock for PM, let’s just say I was more than a little interested. We talked recently by phone, and here’s part of our conversation.

Bernie Goldberg: Once upon a time, sports was a place that we went to get away from the daily barrage of politics and a lot of other stuff we don’t like. Not anymore. Is that a fair assessment?

Jason Whitlock: Yeah, I think one upon a time, sports was second to religion in bringing people of diverse backgrounds together. And so, I think, other than religion, nothing promoted unity more than sports in America.

Jason: I think that the adversaries of America realized the power of sports to bring people together and started investing in turning sports into something polarizing that didn’t bring us together.

“Blackness has been turned into a political ideology.”

And so, they have to hop on board with what Colin Kaepernick is promoting or what LeBron James is promoting, because the social-media machines—Twitter, Facebook, Instagram—will brand you as “racist” if you don’t get on board. If you don’t think George Floyd is akin to Martin Luther King, you could be branded as racist. And people are in fear of that; and so everybody’s truth is being compromised; and everybody’s hopping on board with the propaganda that’s being promoted; and sports have become highly politicized.

And so, people are just being bullied into supporting this anti-American sentiment and promoting the idea that America is the land of unchecked, racial bigotry.

Bernie: For fear, you believe, of being called a racist?

Jason: Or, if you’re black, they’ll call you a sell out and Uncle Tom.

Bernie: Have you been called any of those things?

Jason: Of course. I’ve been called everything under the sun, over social media. I’ve certainly had smear pieces written on me, calling me every name in the book. Yeah, I’ve experienced all those things, but I just don’t take it very seriously because I know who I am, and I know what I’m about. So, I just kind of let it roll off my back, and I’m going to stand on the principles that I believe in.

“I’ve received death threats. I feel like that goes along with the territory…”

Jason: Yes, I’ve received death threats. I feel like that goes along with the territory of being a public commentator or a critic. But yes, I have been threatened with violence via social media—no question about it.

Bernie: What do you think it is about liberal elites—black and white, liberal elites—who have so much trouble with people like you, who are black and conservative? What is that about?

Jason: It’s about politics and power. Blackness has been turned into a political ideology. It’s not a skin color; it’s a way of thinking. And they’ve created the myth—the perception that you have to be a hardcore-Democrat, Left-wing liberal in order to be black.

And you know, I’m someone who’s never voted, has tried to avoid a political identity. I guess it’s fair to call me conservative, but those values are derived from my church upbringing and my participation in sports all the way through college—as a college football player. That’s where my conservative values are derived from. They’re not a political agenda. But I get it.

Jason: It’s certainly a liberal institution, but I don’t think it’s authentic. I think people are doing what they think they have to do to survive. The executives at the top of all these media companies and other corporations live in fear of the social-media lynch mob. And so, as an employee, what you don’t want to have happen is have Twitter jump on your back and send a bunch of tweets saying you’re racist because you know your boss will be like, “Oh, my God. Even though I know this person and know they’re not a racist and know that they’re a good person, Twitter says they are — so therefore, we must eliminate them and get rid of them.”

That’s the reality. The executives are scared. The corporations are scared, and they take it out on the employees. If I have to pretend the police are slaughtering black men in a genocidal plot [with] record numbers, I’ll pretend that and put on a Black Lives Matter sign. They’ll do whatever they can to avoid the Twitter-Facebook shit storm of smearing their reputation, because they know their boss will buy it—regardless of even if there’s no truth to it. I’m more liberated than a lot of my peers, because I’m not married, and I don’t have kids. If I had kids, I would make different choices because it wouldn’t just be me. I’d be like, “Hey, Man, I’ve got to protect.”

Bernie: Along those lines, you have said that sports have traditionally been a platform to promote joy, unity, fun and masculinity, but it’s not fun anymore. It’s not unifying. It’s been emasculated. Tell me more about that?

Jason: Yeah, just about all those things have been eliminated from sports. It’s not about joy. Now, it’s about your political point of view and perspective.

Now, the National Anthem—you’ve got 20 or 30% of the people [who] won’t stand up and see it as an opportunity to say, “Look how evil America is.” It’s just become a polarizing event, and that’s sad because all the people complaining about America have no intention of leaving America—none. You couldn’t get them out of here with a stick of dynamite. They know that they’re lucky to live here and blessed to live here. They know—and particularly those as black people—that there’s no place where we enjoy more freedom than here in America.

Jason: It’s very disturbing. It’s unhealthy for the country in the long term. And I think it speaks to the fact that there are forces that have a lot of say who want to bring down America, and I’m talking about people from within America [who] want to rewrite our Constitution. Bernie, I’m just saying, I believe that the global elite wants America to be more in line with the way China governs. And they want to throw out our Constitution, rewrite it in a way that our government’s more authoritarian, and I think that’s what elites prefer.

Bernie: There’s a lot of talk of white sports journalism, journalist[s] and black athletes—a lot of talk about racial injustice and about how rogue, white cops shot unarmed, black people. Fine. But have you noticed that they almost never talk about black-on-black violence in places like Chicago—or fatherlessness, which is a major contributor to all sorts of problems in black communities? Why are those subjects off limits?

I think what [convicted Minneapolis Police Officer] Derek Chauvin did was wrong and criminal. There’s no proof that it was driven by racism at all—none. Incompetence? Yes. Drunk on the power and authority that he had? Yes. But racism? There’s zero proof that that had anything to do with it. We don’t need to act like all of this is driven by systematic racism.

Derek Chauvin is one individual. He don’t prove shit, other than he was stupid and out of control, and did something criminal. He says nothing about Bernie Goldberg. Just like O.J. Simpson and the shit he did [and he] don’t say a damn thing about me. I’m sorry for cussing, Bernie.

Bernie: That’s all right. Let’s talk about one of the biggest names in sports—LeBron James. He talks about American issues, American culture, American politics—just as you do. What do you have to say about LeBron James?

Jason: He’s way out, over his skis. You know, he’s an athletic prodigy [who] has developed his physical skills to the highest level. I don’t think he’s developed his understanding of the world to a very high level. He’s unqualified for the arena he’s trying to participate in. He’s not some public intellectual. He’s a great basketball player, who I think has a good heart and has decent intentions.

Bernie: Let me end with this: beyond your self-description as a fat black man, how would you more broadly describe yourself?

A+
a-
book
Bias: A CBS Insider Exposes How the Media Distort the News 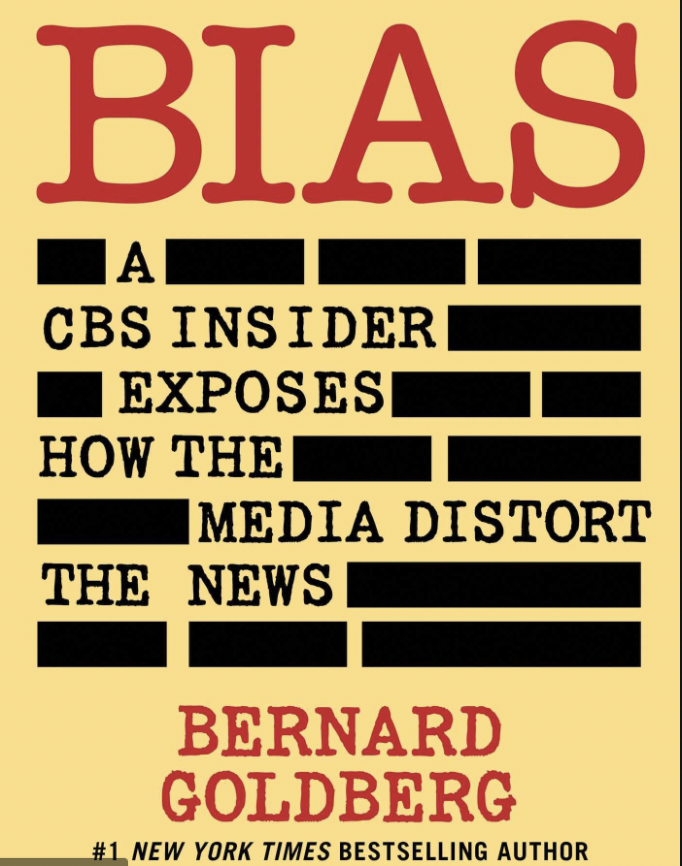 Buy it
book
“A Slobbering Love Affair: The True (And Pathetic) Story of the Torrid Romance Between Barack Obama and the Mainstream Media”

Buy it
book
“Arrogance: Rescuing America From The Media Elite”

Buy it
book
“100 People Who are Screwing Up America”

In Hollywood, White is the New Black
Pop Quiz: What Are the Five Most Mentally Challenging Sports?
Part One: Strip Clubs as a Performance-Enhancing Drug for Pro Athletes?
Woke Advertising